Brought up in a family with a strong love and appreciation for music and artistic endeavours, as a child he excelled in dance, music, theatre, painting, and sketching. He now shares and nurtures these passions with his wonderful children. 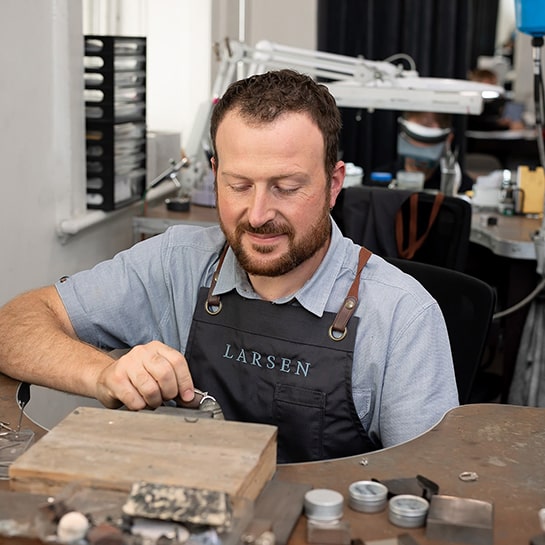 Jarrad thrives as a jeweller because it allows him the opportunity to harness his creative vision, artistic acumen and design skills every single day.

He began his formal studies for a Building Design Diploma in 2003. However, life had other plans as he began to sense that this course might not be the best match for him. After seeking guidance from a career councillor who suggested he try jewellery, Jarrad lost little time in responding to an advertisement for a first-year jewellery apprentice and began working at the jewellery bench soon after. Not one day has passed since then where he does not feel the same excitement and enthusiasm when he is creating a piece of jewellery. Jarrad was to become an architect, designer, and builder after all, only on a much smaller scale.

As a part of the Larsen team, Jarrad brings a commitment to quality and always strives for perfection when creating any piece for his clients.

Picture perfect details from the wedding of Hannah

This oval halo with split band side details is utt

Luke Pacconi
04:08 04 Jun 21
Rod was fantastic to deal with and the whole experience was great. Have recommended to others.

Gary Dey
23:58 31 May 21
We had 3 rings made by Larsen Jewellery and were looked after by Alex Somerville. Turnaround times were honoured, promises kept and getting in for an appointment at short notice when it suited our schedule wasn't an issue. Our rings were made specifically to our own preference, with good advice from our jeweller where we needed it. All of the rings are wonderful and we're very happy with our results. I've no problem recommending Alex, we couldn't have asked for better.

Angelita Tjokro
08:24 30 May 21
My partner and I got our wedding bands from Larsen Jewellery and they were beautiful. All the staff who served us were very professional and knowledgeable. Highly recommended!

Anthony Rowe
10:28 26 May 21
The team at Larsen Jewellers were very professional from design right through to finish. They were very understanding during a difficult 2020 and their level of communication and professionalism throughout was superb. The ring was everything we'd hoped for. It matched our design perfectly and the finished product was fantastic. I can't rate them highly enough!
See all reviews