10 of the World’s Most Expensive Diamonds

Share
Diamonds are arguably one of the most prized possessions and equally one of the most valuable. For any of us, purchasing a diamond is a significant purchase that one will usually take great care before making that final choice. Whether you spend $1000, $10,000 or $100,000 it is undeniably amazing how one small sparkling rock made by nature can remain as one of the most precious and valuable possessions to us all. The value of a diamond is priceless as it becomes sentimental to each of us. Many of us can only imagine what it would be like to actually own one of the world’s most expensive diamonds.
To understand just how valuable a diamond can be, here is a list of 10 of the world’s most expensive diamonds:
1. Pink diamonds are arguably the most expensive type of diamond, so it is no surprise that The Pink Star is The World’s Most Expensive Diamond to be sold at Auction.
The 59.6 carat Pink Diamond fetched a remarkable $83.2 million at auction in November 2013
2. The Archduke Joseph
The 76.02 carat diamond sold for $21.4 million in November 2012 and set a record for the most expensive colourless diamond sold at auction.
3. The Perfect Pink
The 14.23 carat Rectangular Emerald cut Pink Diamond sold for $23.2 million in 2010.
4. The Wittlsbach Graff
The 31.06 carat Deep Blue diamond once worn by members of the Spanish Royal family sold for $24.3 million in 2008.
5. The Magnificent Oval
The 118.28 carat Oval diamond sold for $30.6 million in 2013.
6. The Princie
The 34.65 carat Pink Diamond sold for $39.3 million at auction in April 2013.
7. The Graff Pink
Laurence Graff purchased the 24.78 carat Emerald cut Pink Diamond for an astounding $46 million in 2010.
8. The De Beers Centenary Diamond
Originally a 599 carat diamond that has now been cut into a flawless Heart shaped diamond is valued at $100 million.
9. The Hope Diamond
The 45.52 carat Fancy Dark Grayish-Blue diamond valued at $350 million
10. The Cullinan
The Cullinan is the world’s largest rough diamond ever discovered and has now been cut into nine separate diamonds and is a part of the crown jewels of the United Kingdom. The combined value is estimated at $400 million.
Share

When thinking of engagement rings the most common image to pop into people’s minds is the solitaire, a single diamond on a... 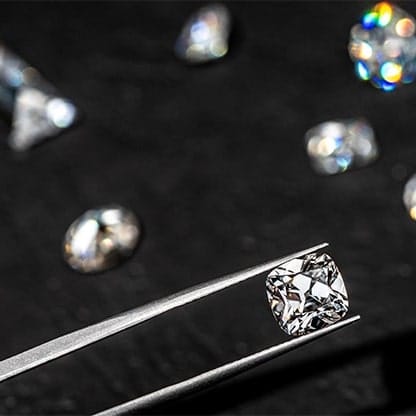 Just a little yellow sunshine to brighten up your

There is nothing more special a than an engagement

Obsessed with this gorgeous yellow diamond. Do you

A warm welcome to all our new followers! If you're

Travis Chard
00:07 09 Sep 21
Everything about the Larsen experience was amazing! From initial consult for a custom piece, through the design process and once completed - the support from staff, the quality of the product and the overall professional integrity was incredible! Definitely recommend!!

George Hysteric
09:36 06 Sep 21
We went to Larsen Jewellery for an engagement ring and after visiting a few other jewellers in the city, Larsen stood out by a mile thanks to their warm, sincere and no-pressure service.We got a custom-made ring based on our idea with the help of Larsen designer Fleur, who designed a stunning ring for us.Fleur communicated with us frequently throughout the process and kept us updated, even during the lockdowns of 2021.The finished ring looks absolutely amazing and we have no hesitation to recommend Larsen Jewellery!

Caitlin w
00:23 02 Sep 21
Larsen have been amazing for our rings. Always taking their time to explain the process and never feeling rushed. Thanks to Jacinta for treating us with such care and checking in.

Naima Siddiqi
05:30 01 Sep 21
Really loved our experience with Larsen. They answered all of our questions and took great care of us!

Drew Farrell
23:41 28 Aug 21
We loved the experience of designing our jewellery. The Larsen team are very friendly, patient and knowledgeable. We are so happy with the final products.
See all reviews