On December 9, 2017, amendments to the Marriage Act 1961 commenced to provide marriage equality such that the right to marry in Australia will no longer be determined by sex or gender . How else has the Australian marriage landscape changed? Read on to find out.

Less couples are getting married.

The Australian population has doubled since the early 1970s but in 2017, there were fewer marriages than in 1970. This trend can be attributed to a cultural shift and changing attitudes towards work-life balance.

Where couples were forced or rushed into marriages in the past due to various stigma towards cohabitation before marriage, less pressure from families and society for couples has seen a decline in the crude marriage rate in Australia. 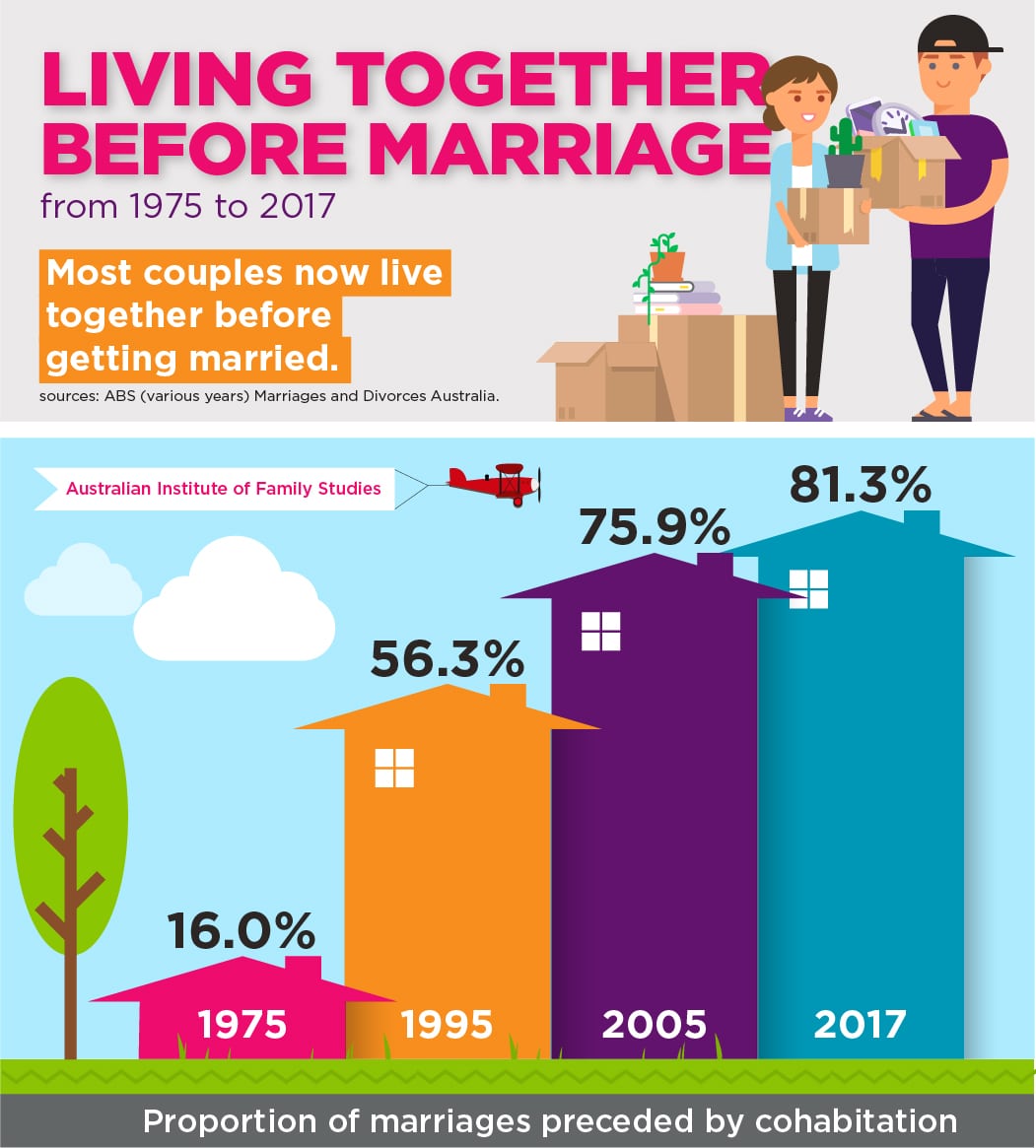 An overwhelming 96.5 percent of all marriages in the early 1900s were performed by ministers of religion in Australia. By 2000, there was an equal number of marriages officiated by civil celebrants as religious ministers.

In 2017, 78 percent of marriages in Australia were performed by civil celebrants[1]. This corresponds with data that reflect a decline in the role that religion has in the average Australian lifestyle.

Since 1997, the crude divorce rate in Australia has been declining. From 2016 to 2017, a small increase was observed.

Australians are waiting longer before getting married.

To be legally married in Australia, a person must be at least 18 years old, unless a court has approved a marriage where one party is aged between 16 and 18 years old[5].

One of the problems with citing the average cost of weddings in Australia is that there is no central administrative body that collects this type of data. The Australian Bureau of Statistics does not collect information on the cost of weddings. As such, sources are scattered with varying sample sizes and collection methodologies. MoneySmart, a mini site run by Australian government body ASIC, provides the most official data with the average cost of a wedding in Australia is $36,200[9]. This figure is based on 2012 data and is one of the most commonly cited statistics.

Since 2012, the average cost of weddings in Australia has increased.

Spending on engagement rings and wedding rings have also increased. We see a gradual increase year after year as couples come in determined to keep up with the crowd.

Another data source, Bride to Be magazine’s 2017 Cost of Love survey, reports that Australian couples are spending an average of $90,128 on their wedding, which was a significant increase their 2015 findings which found the average wedding was $65,482[13].

Almost 40 percent of couples say that the ceremony is the most important part of the wedding to them. The average cost of a civil celebrant in Australia is $711, with slight variances between States and Territories.

Over 90 percent of couples hire a wedding venue with the average price per head for an Australian wedding reception being $150[15].

The average cost of wedding cakes across Australia is $508 with 74% of couples purchasing a wedding cake and 23% reporting that a friend or family member will be making their wedding cake[17].

Australians on average spend $1,534 on their wedding flowers.

Most marrying couples hire a wedding venue, a wedding photographer, a makeup artist, and a hair stylist.

Couples are preferring individuality and are spending more on styling, whether it is through a professional stylist or DIY. Decorations are highly influenced by current trends and styles – exacerbated by Instagram and Pinterest.

According to Easy Weddings, the most popular wedding themes in 2018 are rustic, garden/outdoor, beach, boho chic, contemporary, and romantic with 91 percent of couples hiring a wedding venue.

The wedding venue remains as the biggest priority in the wedding planning process with 11 percent of couples confirming their wedding date based on their chosen venue’s availability.