With a background in Art & Design, Nicole has carved out a vibrant path in the jewellery industry. With a wealth of global jewellery experience which is demonstrated in the way she fully immerses herself into the design process, committed to crafting each customer’s perfect ring. As a bright and energetic personality, Nicole’s love for people shines through. 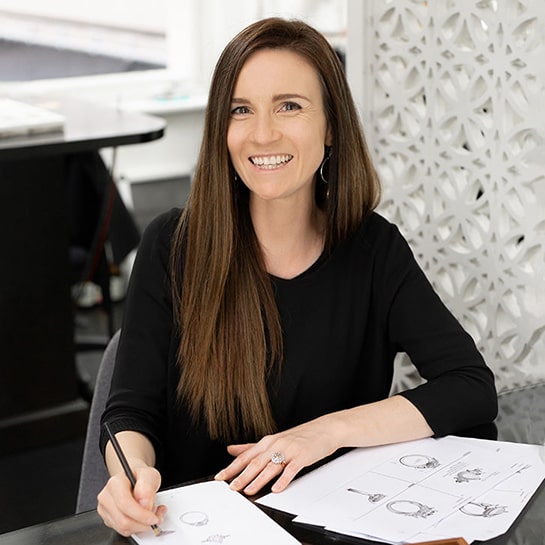 Born in Northern Ireland, Nicole discovered her passion for jewellery design at age 18 and moved to Scotland to study her BA(Hons) Degree in Silversmithing & Jewellery Design, at the prestigious Charles Rennie Mackintosh, Glasgow School of Art. During her time there she exhibited work in many galleries around the UK. In 2007 she won the Precious Metal Bursary Award as well as a Scholarship to study jewellery design at the famous Haystack Mountain School of Crafts in America.

After graduation she began working as a jeweller for a well-known independent jewellery house, Thomas Goldsmiths, on the North West coast of Ireland, where she worked for 7 years under master goldsmith David Thomas. It was here that Nicole discovered her passion for 3D CAD Design becoming proficient in using Matrix and Gemvision.

In 2014 Nicole emigrated to Australia, joining the Larsen team in Sydney and has since completed her Diploma in Practical Diamond Grading at the Gemmological Association of Australia.

Gabriella Brindisi
23:37 29 Nov 20
Both myself and my husband had our wedding bands made by Larsens. From our meeting with Fleur, she was so lovely to deal with and so informative as well in the entire process.Our rings are absolutely gorgeous and everyone we have spoken to has been so professional and friendly.I would highly recommend Larsens if you need any jewellery.

Karen Tam
22:42 19 Nov 20
We were about to purchase our wedding bands at a large brand chain jewellery store because we felt there were not much choice on the market. Luckily at the last moment, we were recommended to visit Larsen Jewellery at CBD. The best decision we have made for our wedding! Great quality, good price, excellent customer services. Will definitely recommend to family, friends and online! Alex Sommerville is very professional and is a knowledgeable jeweller. Thank you again for your hard work :)

Marcus King
21:59 15 Nov 20
Larsen's service and quality was exceptional a few years ago when purchasing engagement/wedding rings and I've found that service and quality to be as good as ever in recently purchasing an eternity ring. They are fantastic to deal with, very reasonably priced, and I cannot recommend them highly enough.

Benjamin Tang
19:37 14 Nov 20
We were very happy with the engagement ring. It was customised for design and fit the budget. Fleur is very professional and guided me through the process. The ring turned out gorgeous. We were so happy with it we made our wedding bands too. Ended up getting a ring to complement the engagement ring and a mokune ring as it was so unique. Great customer service and follow up services. I would definitely recommend Larsen's.

Male Boba
00:00 13 Oct 20
Really happy with the service and craftsmanship! Only had a vague idea of what I was after but Fleur walked me through my options and my wife was over the moon with the final product. Can't recommend highly enough
See all reviews