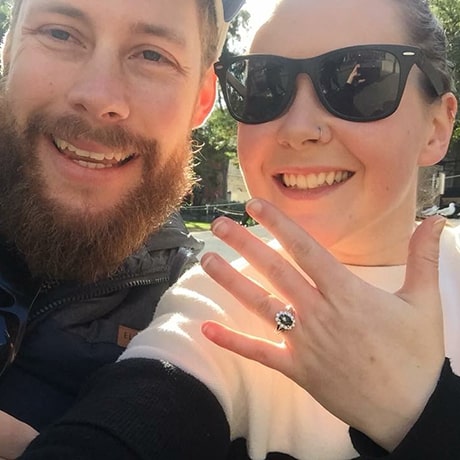 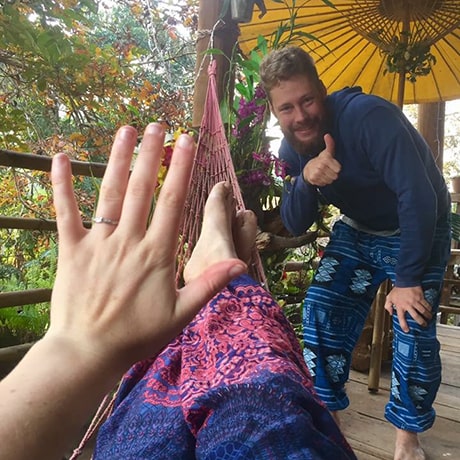 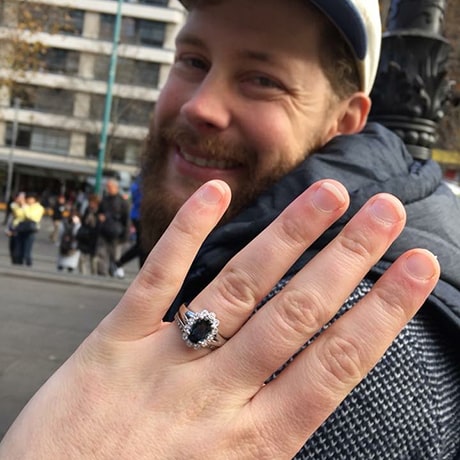 Ethan and I were on a four week holiday around south east Asia. We’d been in Thailand for a week when we came across a place off the beaten track called the ‘Cave Lodge’. It was this amazing log-style cabin set in the tree tops with regular caving and trekking trips organised daily through the lodge.

One evening, we went for a walk and were rock hopping to cross a small river. He pulled me back to huddle on one rock in the middle of the river and that was where he got down on one knee and proposed. Because we were travelling, Ethan didn’t want to carry around a big ring so he had just bought something small but it was still perfect. He explained that when we got home that we would create a proper engagement ring by remodelling his mum’s engagement ring, which she was generous enough to gift to Ethan.

That was when Larsen Jewellery got involved! I was able to then design my own ring with the help of the jewellers at Larsen. When we finally picked up the finished product, Ethan was able to propose to me again! I decided that the smaller ring that Ethan originally proposed with was still very special to me so instead of then fitting another wedding band to the new engagement ring, we did it the other way around. When we remodeled the engagement ring we made it fit the ring I already had, and that then became the wedding band because both rings were special to me.

Take a closer look at our stunning Amore and Mokum

Congratulations to Brooke and Darvid! We are delig

We are absolutely delighted to be joining @bachelo

wailin oo
12:15 26 Nov 21
Professional Service, quality of the product and on time delivery on my engagement ring. Above all my friends asked me where did you buy this ring? you know what to do now :)

Claire Garmaz
10:05 26 Nov 21
Had my absolutely gorgeous engagement ring made through Larsen's. Alex was very knowledgeable and professional throughout the whole process, even through lockdowns! We were shown many stones and options and never felt pressured to rush a decision or go above our budget. The final product is absolutely stunning and we would not hesitate going back to Larsen's in the future.

Nadia Carrivale
08:38 21 Nov 21
Jacinta at Larson jewellery helped create my dream engagement ring. Jacinta was amazing throughout the whole experience and made everything so easy. She is highly professional, honest, knowledgeable and so lovely. I absolutely love my engagement ring! It’s everything I dreamed of and so much more. Thank you so much Jacinta and the team at Larson. I highly recommend them for all your jewellery needs.