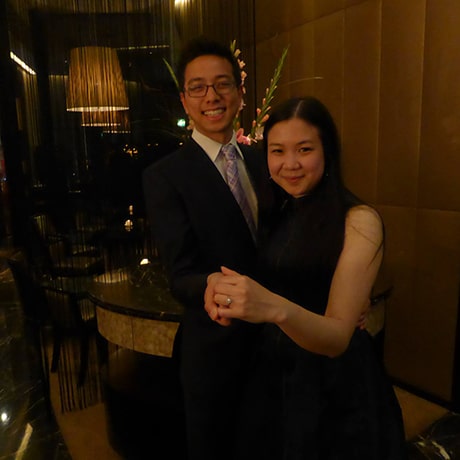 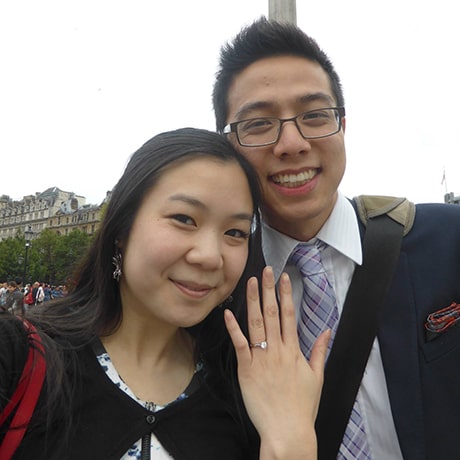 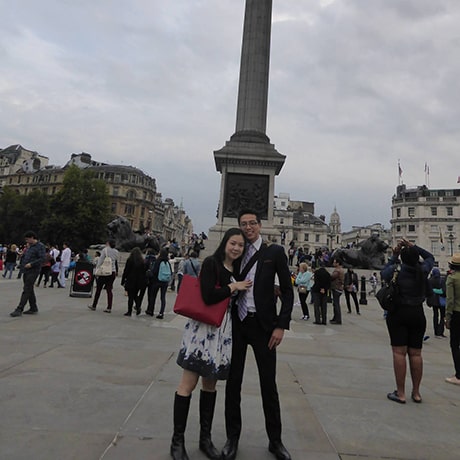 I knew I was going to propose to Patricia, but never really found the right opportunity. Finally, the chance arose when Patricia made plans to go to London to see Hamlet, starring British superstar, Benedict Cumberbatch. At the time, I told her I didn’t have the leave to accompany her, and said she should go on her own. In reality, I knew this represented the best opportunity I would have to make a grand proposal, so I began scheming and plotting with her friends, and soon-to-be bridesmaids, to put it into motion.

This included getting in touch with one of her friends in London, with whom I knew she would meet up. After some consultation with this friend, I ultimately decided to surprise her with a proposal in Trafalgar Square, where Patricia would be expecting to meet her friend for dinner, but would instead find me. I had a series of photos taken by strangers, of myself holding signs at various legs on the trip to London, which I planned to send to her while she was waiting for her friend. The last message was one asking her to turn around (where I presumably would be behind her).

Of course, as it would happen, her phone wasn’t working on the day, and so I had to abandon my elaborately planned scheme and just surprise her in the middle of the Square. She was so confused to see me there that her first words were, ”Are you here for a work conference?” But once I got on one knee, she understood and ‘eeked’ out a, ”Yes!”

Any of our designs on our website can be customise

Counting down the days until we can all celebrate

Something special for your something blue! These b

Christian Proctor
01:07 26 Sep 21
I stumbled across Larsen Jewellery online during the weekend and booked an appointment. The very next day Fleur reached out and locked in a time without hassle. Upon arrival the building is a little tricky to navigate but this only makes things more exciting.As we entered the Jeweller and consulted with Fleur, within 10 minutes we knew that our 12 months of 'umming and ahing' in the search for the perfect shop, consultant and engagement ring to suit our needs was over.Highly recommended and thank you to the team at Larsen Jewellery!

Esther Cheng
07:02 25 Sep 21
Absolutely loved our experience with Larsen Jewellery.After our first meeting with Fleur, we knew instantly - this was what we wanted. Fleur was an absolute gem, taking in our preferences, thoughts and ideas and patiently explained to us what could work and why some would not. She gave suggestions and took our preferences into consideration and designed the engagement ring we truly loved. Our engagement ring was even completed a two weeks earlier than the due date despite the lockdown. Fleur also helped us get insurance set up with no issues at all.We highly recommend Larsen Jewellery! You will not regret this decision :)

David Kent
03:16 17 Sep 21
We were looking for a 'Russian wedding ring' for years, before deciding to look for a jeweller to make us one.We are extremely pleased with the ring we had made to order by Larson Jewellery. It has been a smooth process from start to finish (despite COVID restrictions) and we are grateful to them for all their help, and the ring they delivered.Highly recommended.

Carmel Flynn
07:11 15 Sep 21
Love the service and the beautiful jewellery Larsen's provided to us for our wedding rings. Could not recommend more highly.
See all reviews